Haven’t been online much… we’ve been busier than usual.  Last week my brother and his family were visiting from out of town so we spent a lot of time getting together with them.  The Peeps got to color eggs with their littlest cousin (below, left) even though he was more overseer than anything else!  On the left is my SIL and my sister on the right, both of whom I adore. 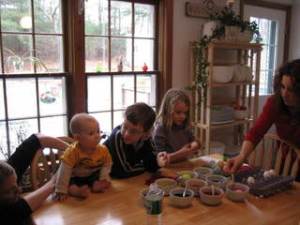 We had a busy day Sunday as we stopped at both parent’s houses (mine in the a.m. for brunch, DH’s in the afternoon for … um, “linner”??) and then went to the neighbors for a small birthday celebration.  Needless to say we were exhausted by the end of the day.  Though despite the busy day I was able to squeeze in a little bit of time in the greenhouse and got some more seedlings going.  I’ve run out of room under the lights, so I’ll have to move some of the flats to the bench in front of the window and hope they don’t get leggy.  I also broke up a few of my community pots and put the seedling in individual pots.  Hard to get in the gardening spirit though with the weather being so unusually cold.

Anyway, I’ve included a few more pics from the weekend.  My nephew is just the absolute cutest!!  It was great to spend some time with him  though it makes it all the harder when they have to leave.

On Tuesday we went on a field trip, and the peeps got to try their hand at some early-American children’s games and help build a scale model whaling ship.  They had a homeschool day at a local museum which was great, but I wish they’d had a better turn out.  There were only a few other families there and I worry if they don’t get decent turn out that they’ll discontinue homeschooler activities.  At the end of the month they’re holding another homeschooler get-together, this time an art lesson.

Speaking of which, we are going to an “open” art lesson at a local Gallery that they do every year.  Last year we went and the Peeps really enjoyed it.  They have a huge room with art supplies set up and assist the kids in a guided activity.  I just got a note in my email that the next one is coming up on the 23rd, so April is shaping up to be a busy month!

On the right are some pictures from the above mentioned museum activities.  The top is Peep #2 doing the stick-and circle thing (I can’t remember what they called it!  The other two shots are of the frame building and both Peeps trying out the stilts.  Neither of them liked those that much, but the other games they thought were really fun.  I wish I’d taken a picture of them playing graces– that was a pretty cool game!

Yesterday we had a marshmallow making lesson with a couple of other homeschoolers.  Last year at a homeschooling meeting at our local library I met a woman who is a chocolatier/baker.  We’ve been in touch on and off and last week she e’d about doing a class with the kids.  So, my other homeschooling friend and her daughter came over as well and we had the lesson in my kitchen.  It was pretty cool.  We learned not only baking, but also a bit of science (the vanilla bean is actually the stamen of a kind of orchid flower that grows in a few parts of the world like Madagascar). 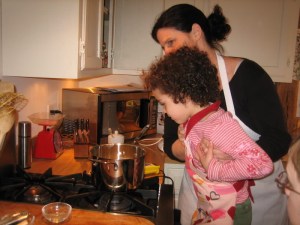 The thing is, now it’s my turn to do something with the kids and I have no idea what.  M has the bees, K is a baker, but I don’t know… I am thinking I’ll get the kids together to do something gardening related.  Other than that, a chick-project is an option.  They are three weeks old today and getting big already! I ‘ll have to give it some more thought and see what I come up with.  Here is the result of our marshmallow making (which I will now be eating from now until  Thanksgiving…) 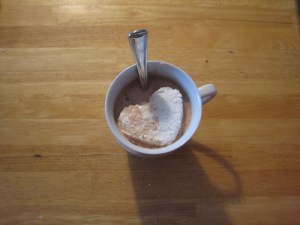