I haven't posted an update about school in a while, so here goes…

Things have been moving along pretty well, despite the fact that we've had several days this month of field trips and playing hooky!  We took a Monday off and went with some of our homeschool friends to see Avatar in 3-D at the iMax theatre.  (But, we made it up another day… that's the beauty of homeschooling

)  The Peeps were so cute, they kept trying to reach out and grab things, like they weren't quite convinced it wasn't actually right in front of them, even though they knew better.  Gotta love kids…

We also took a field trip to Boston to see the Harry Potter exhibit at the Boston Museum of Science…. it was awesome!  I wish they had allowed pictures.  We loved seeing all the props and sets up close.  I'm such a knitting geek that my favorite things were getting an up front view of Ron's sweaters and other goodies knitted by Mrs. Weasley. LOL  But, the best was the gorgeous knit blanket on the end of Ron's bed!  I soooo wanted to snap a picture to reference later but I didn't want to embarrass the kids by getting thrown out of the exhibit.

It inspired me to start working on my own patchwork blanket; it'll be a great way to use up leftover yarn!  Fortunately the Harry Potter Lovers Group at Ravelry had some great screen caps (page down) of said blanket.  *drool*  Anyway, we spent the whole day, had lunch, and got to look around other parts of the museum as well.  Fun day!

Our book work is moving along on schedule and I hope to be finished with the bulk of it by late April early May.  The exception is history–Story of the World has 42 chapters and we do 32 weeks of school, so that means that even if we double up a couple of weeks we will go right into June with history.  Which is fine since we really enjoy history and with our other subject finished up we can really sink our teeth into the topics.

Speaking of history, we are spending the next few weeks studying WWII and the Holocaust.  Ugh.  I truly believe there are things worth fighting for.  I'm a peace-loving gal but seriously, sometimes people need a little ass-kicking!

Wow, my last post was in April!  Such is the life of a gardener, I guess.  I’ll pick back up on my posting (more frequently) once the garden is put to bed for the season.  Right now everything’s either at peak harvest or just passing, so it’s already slowing down some.  I had fabulous success with my pumpkins this year:  13 in all– a witch’s dozen!  Everything did really well, with the exception of my cukes.  They were so bitter;  I will won’t be trying that variety again!  I’ll post more detailed garden notes another time…

We had a great summer.  The highlight was the Harry Potter book release party we went to on July 20th.  The place that did it really went ALL OUT and it was a blast.  The peeps got to pet a variety of “magical creatures” including an owl and a 90-pound albino python! 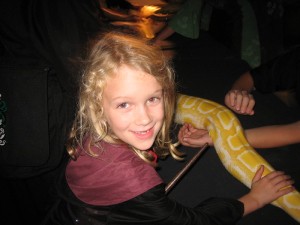 The owl was my favorite;  they truly ARE magical.  Let’s see… they got interviewed by Rita Skeeter, had a potions lesson, got their fortunes read by Professor Trelawney, 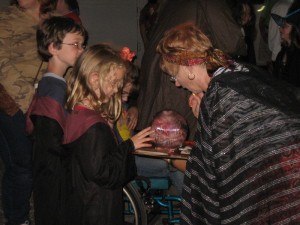 helped Hagrid find Fluffy, and got to watch Snape on trail and decide whether or not he was guilty or innocent.  In addition, we watched a bard preform, got a horse-drawn carriage ride, and got to eat ice cream on the double decker Knight Bus!  Naturally, none of that compared to actually getting the book.  Peep #1 started it on the car ride home.  I let him read a few minutes before bed, then he spent most of the next day reading it until he finished that evening.  It took me quite a bit longer, but I loved it as well. 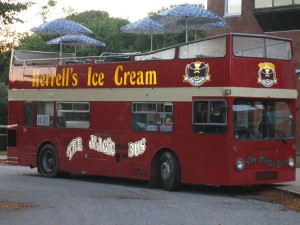 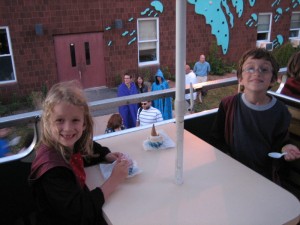 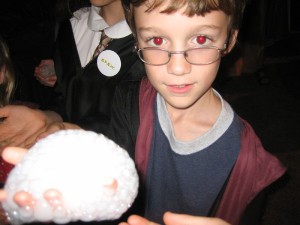 Okay, I KNEW Snape wasn’t bad!! I would have been seriously disappointed if JKR had gone that route; IMO it would have been so horrendously out-of-character if the immensely wise Dumbledore trusted Snape only to have him turn in the end. I loved the retrospective we got to see of Snape in the end, though I was really bummed out he had to die. I loved the character, which I really credit Alan Rickman with… he brought a likability to Snape that the books never had.

I just loved the book. It was a fantastic journey, and I’m sorry it’s over wail. The epilogue was a littlle too corny for me though, but still enjoyable. I just thought it needed an “in between” chapter… maybe set a few months later, so see how everyone is settling into a world without Voldemort. Which reminds me… Harry had wanted to be an Auror– I wondered what his profession was as an adult and wish that had been revealed. (Perhaps he signed a book deal and was living off it … LOL) 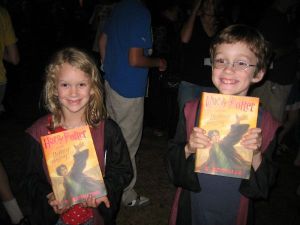 One other small beef: lack of Ginny and Harry. She remained such a small part right to the end. Sure, they got married and lived happily ever after an’ all… but I just figured she’d have a bigger part. Their romance just never rang true to me because we never really get to see it develop… Harry just seems to realize he likes her one day and boom, that’s it. They share some snogging on and off, get married in the end but… just kind of falls flat for me. I still think Harry and Hermoine would’ve been a better match.  They shared a lot of emotionally charged scenes and were a lot closer than Ginny and Harry.

Other than that, we enjoyed our usual vacation, had a visit from my brother and his family, and generally spent a lot of time doing summery things.  Now I am turning my attention towards school, which we start the Tuesday after Labor Day.   BUT, the details I will save for another day, another post, as this is already turned into War and Peace…

This week we signed the peeps up for a Harry Potter book release event this July.  We are all so excited!  Harry Potter is big in this house.  In fact we have sometimes been known to refer to our homeschool as Hinkley Hill School of Witchcraft and Wizardry and have had the occasional Potions lesson.   So, the release party will be a blast; we’ll get to dress up like wizards, play trivia games, and mix with other fans.  Each peep will get a copy of the book which is good news for me, since Peep #1 (it’s too advanced for Peep #2) can read one and I’ll read the other.  One copy would have meant I’d have to pull rank on him

DH is still on the second book (though he’s seen all the movies) so that leaves him out of the running.  Speaking of which, number 5 comes out in July as well.  It’s going to be a Harry Potter summer!