This review is either reeeeeeaaally early or reeeeeeeaaaally late, depending on how you look at it. 😉  Anyway, we are finishing up this week and preparing for Winter Break.  The Peeps have really enjoyed this Native American block.  They wanted to continue right through to break, so that’s what we did.  Tomorrow is our last “official” day of the semester, but we’re planning on finishing up some things –not doing anything new.  So it’s safe to say were done and show some examples of the last part of the block:

We learned about Native American moons and created our own calendars.  Each month we marked the full moons with their names, and drew a picture to illustrate:

We learned about the Iroqouis tribe as we spent the last couple of weeks reading and illustrating tales from The Boy Who Lived With Bears and Other Iroquois tales. 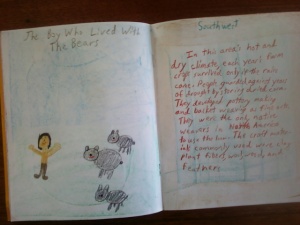 "The Boy Who Lived With Bears" (and copywork page) 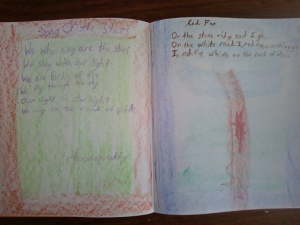 "How Birds Got Their Feathers" 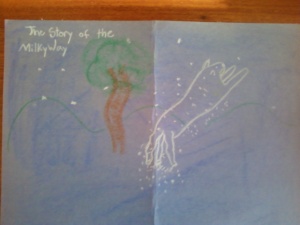 A book report from Peep #2 on the novel Birchbark House, and one from Peep #1 on the book Black Elk’s Vision.  Also some Eastern Woodland tribal designs that they copied from my chalkboard drawing.  We used these symbols to make a Pequot game called “Hub-bub”: 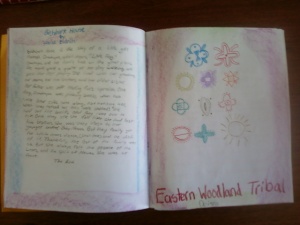 My Chalkboard Drawing (sorry for the poor quality!)

Sawing the chips for Hub-bub 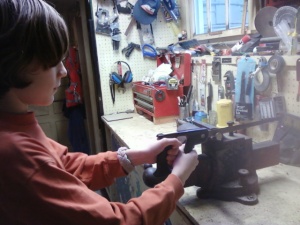 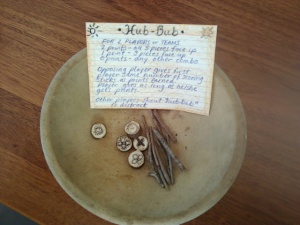 This game is actually fun– the Peeps have played it several times since we made it.  I think it will get a lot of use!

We read a story about corn– “How Corn Came to Be” (Earthschooling) and had a corresponding form drawing lesson:

We also tried our hands at making simple tools like the ones we’d seen at the museum: 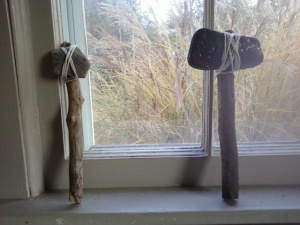 And finally, we ended our block with making basic dream catchers! 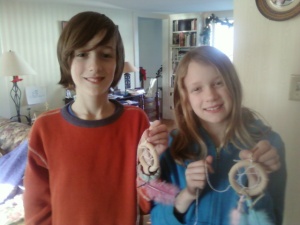 Peep #2 was learning about square roots in her Math lesson this week, and I came up with this idea to help her remember.  It worked!

This would have been a great tie-in to the Botany Block!

More math for Peep #2 (Peep #1 continued with his Saxon):

Tanagrams- she created the design with her pieces and copied.

And finally– since we’re spending so much time on verb tenses for grammar and it can be a little dry, I had them create “verb tense suns” to help them practice the infinitive form and various tenses.  Here’s an example:

That’s about it!  Since we are off until January, I won’t be posting weekly reports, but I do plan to post now and then on the different crafty things we’re working on for the holidays.  Hope everyone is enjoying this wonderful time of year!